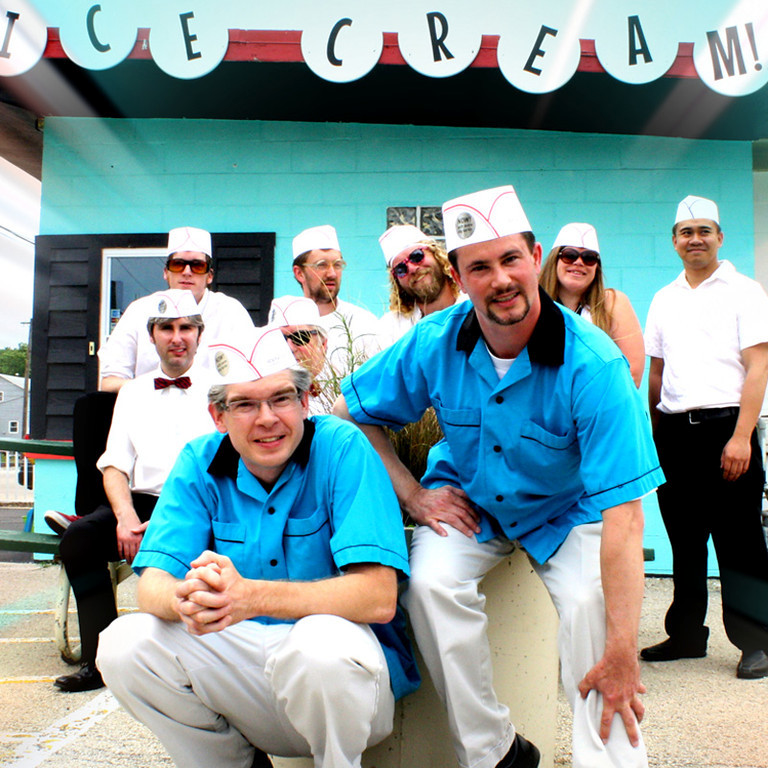 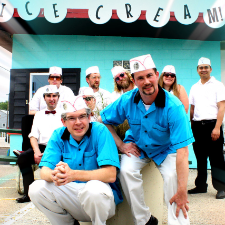 Born out of a modest home recording studio buried deep within the Chicago suburbs, it’s hard to believe the unique musical institution known as The Ice Cream Vendors was originally conceived over twenty years ago. What was founded in friendship has over time produced several cassette tapes and a CD, live performances with a full band and horn section, and a road-less-traveled approach to songwriting that has become the pride of Westmont, IL.

The Ice Cream Vendors (ICV), made up of longtime pals Jon Kostal and Greg Barnett, is not just a musical duo but a mysterious life force. Those familiar with Jon and Greg know that boy meets girl lyrics and verse/verse/chorus clichés are simply not in their genetic makeup. Defying classification, ICV examines its subjects through a sometimes-surreal lens, but always with fondness and curiosity. Topics include absurd musings about high school janitors, edible birds, deep-sea divers without limbs, and a boy with a plant growing out of his head. More stream of consciousness than satire, ICV is interested in taking the stranger-than-fiction world we inhabit and turning it on its head; that the lyrics tend to reflect ordinary, everyday occurrences only points out the Neo-Dada genius of two guys who never indulged the self-loathing irony so often found in modern pop. Perhaps ICV trombonist Mike Kinnavy put it best: “When you hear ICV singing about riding to a jazz band meeting in the rain, that’s exactly what was happening.”

After recording some demos and cutting their teeth on the high school talent show circuit, ICV first peaked around the time late 80’s hair bands had officially succumbed to thrift store flannel and the emerging coffee shop culture of Seattle. In fact, it was just as the guitar-driven angst of Kurt Cobain had become fully absorbed by the mainstream that Jon and Greg released On Ice, ICV’s first full-length CD. Railing against trend, ICV delivered a diverse musical hybrid that drew from numerous offbeat sources: Polka beats collided with rap. Synthetic clarinets happily replaced electric guitars. Devoesque electronica was unabashedly front and center at a time when most people were reluctant to admit any past association with eye makeup, Energy Domes, and other Post-punk oddities. With aggressive word of mouth and a DIY marketing campaign, On Ice quickly became a cult favorite amongst hip suburbanites, college students, and anyone brave enough to unleash their inner geek and try something new. It helped that the tunes were, well . . . catchy. Ask any band nerd who attended EIU in 1994 if they remember singing along with that “underwear song” from some darkly nebulous, student apartment moment in time. If they say no they are lying. In fact, it’s probably in their head already: “Ai yi yi yi!”

Like many bands, ICV had a great first run, but eventually sought hiatus due to the pressure of college pursuits, jobs, relationships, and the practical challenge of long distance. Though the group never officially disbanded, songwriting endeavors were put on long-term hold as Jon and Greg got older and gradually settled into domestic bliss. For nearly 15 years ICV sat dormant, much like a paralyzed scuba diver figurine slowly collecting algae at the bottom of a lonely tank. Oftentimes, it seemed like nostalgic quips from the “where are they now?” file might be all that remained of Westmont’s original merging of music and dairy-infused performance art. However, like so many shelved creative endeavors that are pure of heart, the ICV philosophy could not be ignored forever. The cocooning algae that began as feculent aquatic straight jacket eventually began to thrive of its own volition, spreading like a leafy green signal, nagging, nay begging to be put under a microscope and reexamined, the constant reminder of a need to liberate the auto-tuned twenty-first century of homogenized downloadable drivel. In early 2010, when the prospect of an ICV reunion performance came knocking, Jon and Greg realized it was at long last time to consider bringing their wet-suited muse to surface. With the encouragement of friends and former band mates, plus newfound confidence instilled by live dates at an outdoor music festival and Christmas parade, ICV began diligently working on songs for a new CD. At present we are just months away from ICV’s first studio release in over a decade, one that promises to be darker, funkier, and more abstract than Jackson Pollock getting over with a gallon of rocky road. Featuring a brave new arsenal of digital gadgetry and over 20 combined years of life experience culled from the most remote fringes of the Information Superhighway, ICV tackles the modern age with poise and finesse. More stories. More Westmont. More Atari. More Speak & Spell. More Dog Barks. More bizarre. More better than ever.